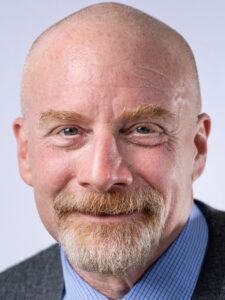 Trained first at the Massachusetts Institute of Technology (MIT) and then at the University of Chicago (UChicago), I have over 25 years’ experience creatively blending tradition and innovation in “Great Books” Socratic Method seminars for adult and undergraduate students of diverse ages and backgrounds and over 5 years’ experience designing, administering, and conducting live, interactive online seminars that equal (and often surpass) the quality of onsite seminars, as well providing professional development for teachers and administrators new to the online format.

My teaching focuses on helping students develop their cognitive skills and critical empathy by facilitating “Aha!” moments of discovery — what I often call “Group Therapy with Great Books”. My administrative work focuses on delivering “win-win” satisfaction of multiple stakeholder objectives through continuous organizational development grounded in sound first principles. Overall, I am devoted to helping individuals, groups, and organizations think more clearly about themselves and the world around them (“because sloppy thinking is not a victim-less crime”).

Beyond an interest in “deep thoughts” generally, I am particularly drawn to exploring the ways in which the production and reception of texts shape people’s views about themselves and the world in which they live; to the secular study of Abrahamic scriptures (especially from comparative or “interfaith” perspectives); to literary approaches to Plato’s dialogues; and to the philosophy of liberal education.

▪ Work is love made visible. (Gibran)
▪ To love someone is see them as God intended them to be. (Attributed to Dostoevsky)

Before changing direction in my late 20’s, I was primarily a software engineer whose professional development tracked the development of the computer industry as a whole, working first on mainframe computers, then on mini computers, and finally on personal computers. In addition to my day job(s) analyzing systems and designing and developing software, though, I also pursued an interest in artificial intelligence (AI) — the attempt to make computers “think” like human beings. Over time my “side interest” became my “preoccupation” and I began considering returning to school for graduate work. At the same time, however, I was coming to the realization that AI researchers knew much more about the functioning of computers than about the functioning of the human mind and thus that AI was to some extent putting the proverbial cart before the proverbial horse by trying to replicate a poorly understood original. My interest thus shifted from the study of “artificial intelligence” to the study of “natural intelligence”, from computers to human beings.

Given the focus (some would say “narrowness”) of my engineering education I had had relatively little exposure to the liberal arts as an undergraduate and I thus began an intensive course of what I half-jokingly called “remedial liberal education” as an initial remedy. Given my new-found interest in human beings I focused on the humanities — after all, it had the word “human” built right into it. After a while, however, the humanities began to seem entirely too-subjective to my objectivity-trained mind and I migrated to the social sciences where I focused on anthropology in general and cultural psychology in particular. Over time my interests coalesced in what is sometimes known as “literary pragmatics”, the study of the effects of literary “production” and “consumption” on the thought-patterns of individuals (“cognition”) and groups (“culture”). Or, in other words, the study of “literature as (potent) actions” that have consequences rather than “literature as (inert) objects” that simply exist. Or, in still other words, the study of “books as verbs” rather than “books as nouns”.

In the course of my graduate studies at the University of Chicago I received an M.A. in General Studies in the Humanities and completed all of the coursework (but not a dissertation) for a Ph.D. in Human Development.

After receiving my M.A. I took what in hindsight turns out to have been one of the pivotal steps in my life: I joined the teaching staff of the University of Chicago’s Basic Program of Liberal Education for Adults, a four-year, non-credit “Great Books” program for adults (most of whom have one or more academic degrees). Prior to joining the teaching staff, I barely knew — and cared less — what a “Great Book” was, or who Mortimer Alder and Robert Hutchins were, or the role that “Chicago” had played in the Great Books Movement. But over time I “drank the Kool-Aid” and came to appreciate first-hand the genius of using the Socratic Method to facilitate study of the classics. Indeed, so captivated was I that I soon developed an interest in both the history of the Great Books Movement and the pedagogical theory of the Socratic Method.

What most impressed me about the Great-Books-and-Socratic-Method combination was that it appeared to be a perhaps uniquely-effective means of developing in students an awareness of the range of perspectives and assumptions that different individuals and different traditions — including themselves and their own — bring both to life situations in general and to the reading and interpretation of individual texts in particular. Students thus acquire a greater awareness of “what the world knows and knew of human living and doing” (DuBois) as well as of themselves. They also develop their ability for both “critical thinking” and “critical empathy”, both about themselves and about others. In my own work, this has been most powerfully apparent in courses devoted to the (secular) reading and discussion of “sacred” texts of the Abrahamic traditions. In short, I have come to appreciate the Great-Books-and-Socratic-Method combination as a perhaps uniquely-effective approach to facilitating the “better thinking” that can lead to “better living”.

Please feel free to visit me on:

And thanks again for stopping by.